Open carry is not allowed inside of the Wisconsin State Capitol.

The Wisconsin State Capitol houses all three branches of state government and each has its own policy on firearms. Firearms are not allowed in the offices of the Wisconsin State Capitol Police or in the Supreme Court. Legislative offices throughout the Capitol can choose whether to post a sign on their door to signify that firearms are not allowed in their offices.

An Assembly representative may post a sign in a prominent place near the public entrance to the office, stating a weapon restriction for that office. The Assemly shall provide uniform signage for use by Assembly Representatives under this policy. 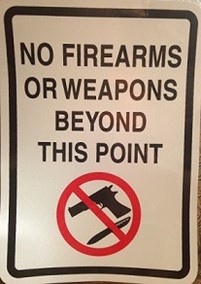