Doing our taxes is a task that few of us enjoy, but we all have to do them. As Americans, we are expected and legally obligated, to contribute a portion of our income to our governments. While most of us would prefer to bypass this annual duty, it is a chore that most of us must complete before mid-April.

This year, Tax Day has been postponed to Monday, April 18, 2016. The usual tax deadline, April 15 is Emancipation Day, which is a holiday in Washington, DC.  Emancipation Day is the anniversary of the day President Abraham Lincoln signed the order to end slavery in the United States. It is annually held on April 16th. However, April 16th is a Saturday, so the official observance was moved to April 15th, thus moving tax day for all Americans this year.

Despite the fact that we get a couple of extra days this year, it is recommended that all taxpayers start their taxes early and file well before the deadline. Whether you are filing yourself or employing the services of a tax professional, filing early and taking your time will increase your accuracy and decrease your stress.

In my experience taxpayers who wait until the last minute are much more vulnerable to making a mistake or forgetting an important part of their tax filing. Gather your information as soon as you can, make an appointment early this spring and process your taxes with time to spare.

As you gather your tax documents and receipts, please note that we are all obligated to pay the Wisconsin use tax on all purchases of goods and services that we make out-of-state, online or through catalogs that don’t collect a Wisconsin sales tax.  If you have ordered an item from a retailer who did not collect Wisconsin sales tax, take 5% of the full purchase price and this is the amount of use tax you owe to the state.

Paying the use tax levels the playing field with in-state, traditional “brick and mortar” retailers and in-state online businesses such as Lands’ End.  For example, when you purchase an item from Lands’ End, you are automatically charged the 5% sales tax by the company.  However, if you purchase a similar item from LL Bean, they do not collect this tax and you would owe 5% use tax to the state.

Your role as a taxpayer plays an extremely important role in the finances of our state and federal governments. In 2013, Wisconsin residents paid more than $7 billion in state income taxes and more than $19 billion in federal income taxes.  Beside property taxes, income taxes are the largest tax many of us pay each year.

The $7 billion contributed to our state’s General Fund makes up 53% of state government revenue. The remainder of funding for state government comes from sales tax (35%), excise taxes (12%) - taxes paid when purchases are made on a specific good, and corporate taxes (7%). 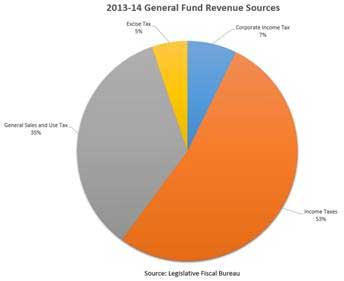 As your State Senator, I am consistently seeking ways to lower and simplify all taxes, especially income taxes, in Wisconsin.  We have already made significant progress toward simplification by lowering the number of tax brackets from five to four, reducing tax rates, and eliminating various loopholes and special deductions.  Since 2010, 19 different tax credits have been eliminated in Wisconsin.

These numbers are significant because the years leading up to this rate change saw increases of 10% (2010-11), 5.1% (2011-12) and 6.5% (2012-13).  But then, we changed the rates and after several years of increased revenue from income taxes, a cut in rates is resulting in less money taken out of taxpayer pockets without a recession causing the decrease.

Last year was the first full year that Wisconsin has been withholding less from every person’s paycheck; $323 million was budgeted to allow the state to lower withholding tables.  This means that the state has been taking less from each paycheck over the year, allowing more money to stay with taxpayers instead of being sent to Madison.

As you prepare your 2015 taxes, I would encourage you to consider a change that will be effective for your 2016 taxes if you are married. In the 2015-2016 state budget, we fixed the “marriage penalty” in our tax code. Previously, single filers were able to claim a larger tax deduction than those who are married and filing jointly. This created a significant disadvantage to those filing joint taxes as married couples.

For 2016, we increased the standard deduction for joint filers, moving closer to eliminating this unfair treatment. As with all detailed questions about your income taxes, please consult a tax professional for advice and information about how this change will impact you directly.

In Wisconsin, you can file your taxes electronically through the Wisconsin Department of Revenue (DOR) website: https://www.revenue.wi.gov/wi_efile/. There are also several organizations that offer free volunteer income tax assistance for those who qualify. Please call 608-266-2486 for more information and to locate an organization who may be able to help.

For more information and to connect with me, visit my website http://legis.wisconsin.gov/senate/17/marklein  and subscribe to my weekly E-Update by sending an email to Sen.Marklein@legis.wisconsin.gov. Do not hesitate to call 800-978-8008 if you have input, ideas or need assistance with any state-related matters.