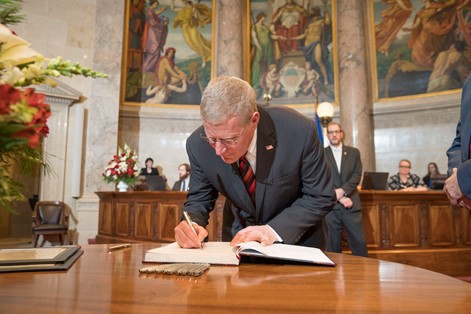 During his time in the State Assembly, Howard served as the Chair of the Assembly Committee on Ways & Means and the Vice-Chair of the Joint Audit Committee.

Howard was appointed Co-Chair of the legislature’s budget-writing Joint Committee on Finance (JFC) for the 2021-22 session. He has served as a member of this committee for four sessions.

In addition to the JFC, he currently serves on the:

He has also been appointed to the University of Wisconsin Hospitals and Clinics Authority Board of Directors.

Howard was raised on a dairy farm in rural Spring Green.  He is married to Peggy, a registered nurse. Howard has two children and three stepchildren, as well as six grandchildren.

He graduated from River Valley High School in Spring Green in 1972 and is an alumnus of UW-Whitewater (’76), where he received a BBA in Accounting. After graduating college, Howard began his accounting career at First Wisconsin National Bank (now US Bank). In 1978, he was recruited by Virchow Krause (now Baker Tilly) and began his public accounting career in the Dodgeville office.

Howard accepted a promotion and transfer to the Whitewater and Fort Atkinson offices of Virchow Krause in 1980. He was promoted to partner in the firm in 1984.