The Department of Administration (DOA) administers the Emergency Rental Assistance and Emergency Solutions Grant programs to provide housing assistance and emergency shelter assistance to individuals in need. We conducted a limited-scope review of how DOA administered these two programs.

The Emergency Rental Assistance program provided $64.0 million in benefits for 15,968 households from March 2021 through September 2021

The Emergency Rental Assistance program helps individuals affected by the public health emergency to cover the cost of rent and utilities. Payments for program benefits are typically made to landlords and utility companies. Through June 2021, DOA received $434.7 million in supplemental federal funds for the program. DOA contracted with various entities, such as community action agencies, to help administer the program.

We found that DOA’s program manual provided application guidance that did not comply with guidance the U.S. Department of Treasury provided to states in February 2021.

We selected a random sample of 40 individuals who received program benefits in fiscal year 2020-21 and reviewed in DOA’s electronic system the documents they provided when applying for program benefits. We found that:

We found that program case files were not reviewed as extensively as planned and that corrective action was not consistently taken after reviews identified issues. We also found that some individuals received program benefits for longer than the 15 months permitted by federal law.

Treasury indicated it would consider reallocating program funds if a state had spent less than 30.0 percent of its funding through September 2021, excluding administrative expenditures. After DOA reported it had spent 22.6 percent of its funding, Treasury allowed DOA to transfer $163.2 million in January 2022 to five local governments that operate their own emergency rental assistance programs and that had spent most of their federal funding for these programs.

The Emergency Solutions Grant program used supplemental federal funds for projects that served 19,013 individuals from 12,001 households from July 2020 through December 2021

The Emergency Solutions Grant program funds projects to address homelessness, including those related to emergency shelters, rapid re-housing assistance, and homelessness prevention. In July 2020, DOA was awarded $32.5 million in supplemental federal funds for the program. DOA contracted with coalitions of nonprofits and local governments to help administer the program. 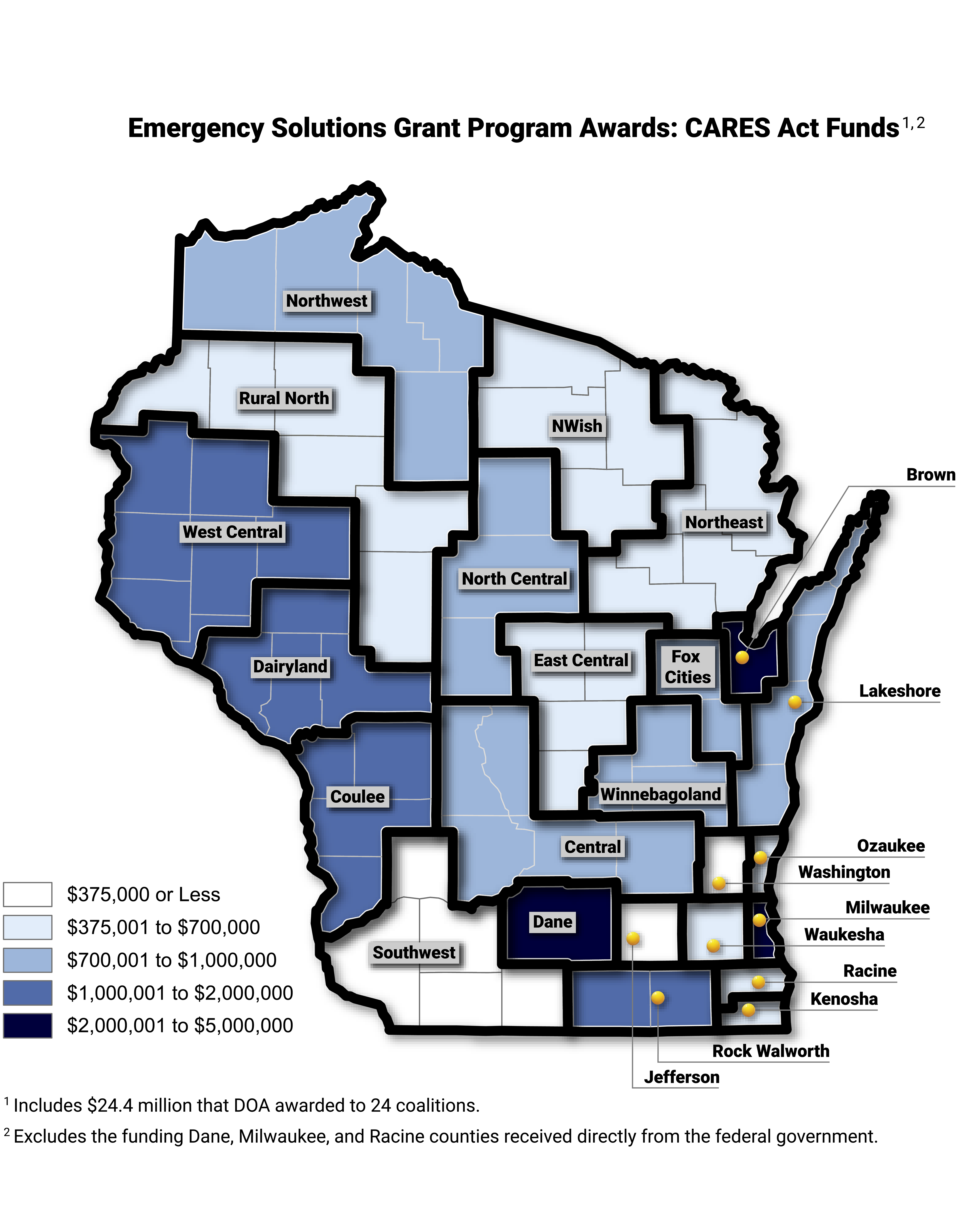 DOA annually reviewed information in three case files at each entity that provided program services. In addition, DOA required each coalition’s lead agency to submit supporting documentation for the reimbursement request it had submitted for one month each year. We found that DOA allowed the entities to select all of the case files it reviewed in 2021, and that DOA allowed each lead agency to select the month for which DOA requested supporting documentation.

We recommend DOA report to the Joint Legislative Audit Committee by August 26, 2022, with information on program expenditures and improve how it monitors the program.