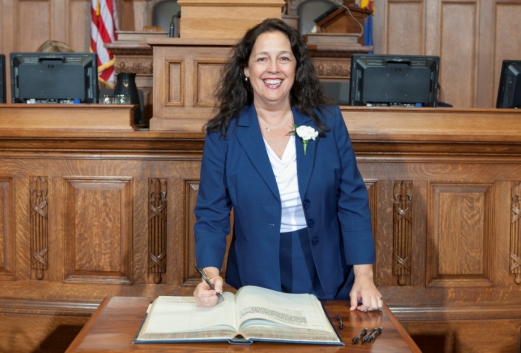 Representative Jill Billings was elected to the State Legislature in November of 2011, and is now serving in her fifth consecutive term.  Rep. Billings represents the 95th Assembly District which encompasses the city of La Crosse, French Island, and parts of the Town of Shelby.

Jill currently resides in the city of La Crosse and maintains many connections to the community.  In addition to serving on the La Crosse County Board, Jill worked at the Friendship Program for ten years teaching English as a Second Language and citizenship courses to Hmong adults.  Jill has also served on many local boards and agencies including the Community Foundation Granting Advisory Board, the YMCA Pioneering Healthy Communities, and Couleecap.

In the Wisconsin State Legislature, Jill has demonstrated a strong passion for child welfare, advocating for environmental issues, maintaining local control, and fighting for hardworking middle-class families across the state.  Jill currently serves as ranking Democratic member on the Assembly Tourism committee, and is a member of the Colleges and Universities, Children and Families,Government Accountability and Oversight, and Substance Abuse and Prevention committees.  She also serves as a co-chair of the bipartisan Wisconsin Legislative Children's Caucus, as well as on the State Building Commission, the Joint Legislative Council, the Child Abuse and Neglect Prevention Board, the State Council on Alcohol and Other Drug Abuse, the Governor's Council on Tourism, the Mississippi River Parkway Commission, and the Historical Society of Wisconsin Board of Curators.

Since her election to the Legislature, Jill has received a number of awards from state and national groups including: the Scenic Wisconsin Champion designation, the WEDA Champion of Economic Development Award, the YWCA Outstanding Women Award, the Wisconsin Counties Association’s Outstanding Legislator Award, the Dave Duax Award for Bipartisanship, the League of Conservation Voters’ “Conservation Champion” designation, the National Foundation for Women Legislators Woman of Excellence Award and more.  In addition, she has been selected and participated in legislative leadership trainings by the Council for State Governments including the Bowhay Institute for Legislative Leadership Development (BILLD), the Henry Toll Fellowship Program, the NCSL Early Learning Fellows Program, and the NCSL Three Branch Institute.