The proposed tax cut is specifically targeted to individuals making less than $60,000/year and families making less than $100,000/year. For example, a family of four making $45,000/year would receive an additional $607 for tax year 2017. These middle class tax cuts would be paid for by repealing the largest corporate tax giveaway in Wisconsin history – of which 88 percent goes to Wisconsinites making more than $500,000/year – and instituting a Millionaire’s Tax by creating a fifth tax bracket for Wisconsin’s most wealthy.

Over the last three decades, the average incomes for Wisconsin’s top 1 percent has increased by 120 percent, yet the incomes of the remaining 99 percent grew by just 4 percent (Pulling Apart 2016, by the Wisconsin Budget Project and COWS). Not only are middle income people paying the largest percentage of their income of any group in state and local taxes (Institute on Taxation and Economic Policy), the number of Wisconsin middle income families is declining (Pew Charitable Trust). 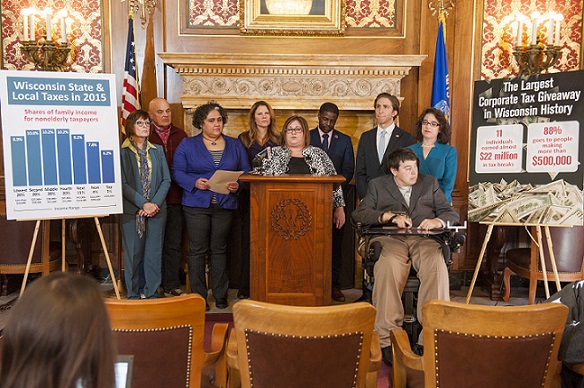