One in four Wisconsinites works a job that pays a poverty level wage. While the cost of living continues to increase, workers are held captive by a $7.25 an hour minimum wage that is not tied to inflation and has not seen an increase since 2009. While federal and state law provide unpaid family and medical leave protections to some employees, 40% of workers do not have access to a single day of paid leave, and many have no access to any paid or unpaid leave at all. Currently, our state laws do not allow local communities to raise the minimum wage or guarantee workers have access to paid leave.

No one who works hard should have to be poor, nor should any working person have to choose between their health or the health of a loved one and their job. In the hands of Republicans, state government has failed its citizens by not raising wages and not addressing a lack of guaranteed paid leave. It is time to restore the ability of local elected officials to set wage floors that are reflective of the cost of living in their communities and to address the challenges faced by workers who need to take time off when they or their children are ill. 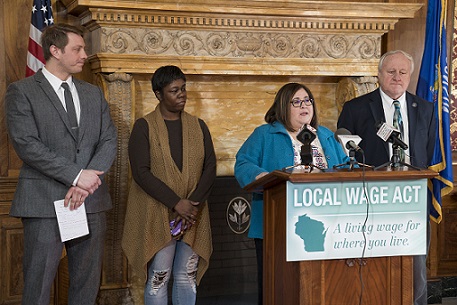