MADISON-Yesterday, Representative Lisa Subeck (D-Madison) was sworn in for her third term in the State Assembly. Representative Subeck represents the 78th Assembly District comprised of primarily the far west and southwest sides of Madison.

“I am honored to represent the residents of the 78th Assembly District and appreciate the trust placed in me. As I begin my third term in the Assembly, I remain committed to bringing the voices of my constituents to the Capitol,” said Representative Subeck. “Having elected a new Democratic Governor and Attorney General, I return to the Capitol with a renewed sense of optimism about Wisconsin’s future. I look forward to working together with this new administration and with my colleagues in the Legislature to move Wisconsin forward.” 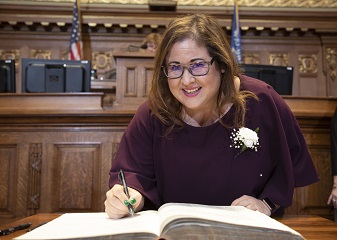