Representative Lisa Subeck Response to State of the State

MADISON – Representative Lisa Subeck (D-Madison) made the following statement in response to Governor Walker’s 2017 State of the State address:

Once again, rather than honestly assessing the condition of our state and laying out an agenda that would put Wisconsin back on track, the Governor continues to ignore reality and paints an artificially rosy picture. The facts are indisputable: Wisconsin has the most diminished middle class in the country. We have had below average job growth in every year that Governor Walker has been in office, and we now face a $700 million budget deficit.

Wisconsin’s transportation deficit has left our roads in a state of disrepair, and the Governor has no plan to do anything but delay some critical repairs while putting other projects on the state’s credit card. Once again, the Governor plans to kick the can down the pothole-covered road rather than offer a solution for sustainable transportation infrastructure funding.

Nothing the Governor offered in his address today will combat the cuts he has made to education during his term in office. His cuts have resulted in residents around the state needing to pass expensive school district referendums just to keep the lights on in our neighborhood schools. Republicans shirk the state’s responsibility for ensuring every child has access to a top-notch public education, and in turn, they place more of the burden for funding education squarely in the laps of local property tax payers.

As business owners choose where to start a business and families choose where to live, the quality of public education plays a critical role in their decisions. We will not see the needed economic development in our state without strong neighborhood schools.

Perhaps Governor Walker and legislative Republicans think the comeback is real because of the company they keep. The tax credits they worked to pass have benefited their wealthy friends and donors, while leaving the rest of us in Wisconsin behind. Hardworking Wisconsinites must fear layoffs and closures while Walker’s administration provides tax-breaks and giveaways to big corporations that outsource jobs. Perhaps the comeback is real for an elite group of wealthy Republican donors who can afford to buy influence over the Governor, but the deck is clearly stacked against the average working Wisconsinite.

To the extent that there are any economic bright spots for Wisconsin, the credit lies with President Obama and the efforts he undertook during the last 8 years to strengthen the economy despite opposition from Governor Walker and Republicans every step of the way. While the country as a whole is making economic strides, Wisconsin lags behind, ranking eighth in the Midwest for job creation and dead last in the nation in business start-ups.

In the coming weeks and throughout the legislative session, my Democratic colleagues and I will offer bold proposals to build a brighter future for Wisconsin. We are committed to making sure hardworking families can be successful and achieve the American Dream. Our proposals will support our neighborhood schools, fix our crumbling infrastructure, grow family-supporting jobs, and rebuild the middle-class.

The rosy picture of Wisconsin painted by the Governor in tonight’s speech does not mirror the daily reality faced by Wisconsin families every day. The people of Wisconsin are no longer interested in hearing Republicans make excuses for their failure to provide real relief and new opportunities for working Wisconsinites. Scott Walker and the Republicans have controlled the Governor’s office and both houses of the Legislature for six years, and it is high time they follow the Democrats’ lead by putting middle class Wisconsin families ahead of wealthy special interests.” 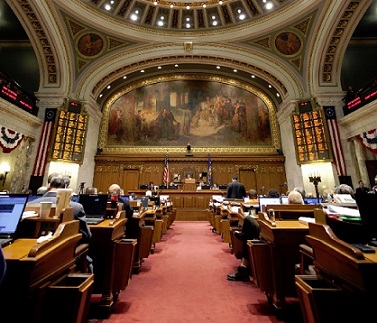