Co-Chairs to Focus on Budget, Prioritize People over Profits

MADISON – Today, Representative Lisa Subeck (D-Madison) called on the Republican Joint Finance Committee chairs to realign their priorities by focusing on the state’s past due budget and putting the people of Wisconsin first. Subeck’s call comes as the Joint Committee on Finance is holding a hastily scheduled public hearing in Sturtevant, near the Illinois border, on Special Session Assembly Bill 1, which would provide a $3 billion subsidy to Foxconn. Meanwhile, the Joint Finance Committee has taken no action since June 15 on the 2017-19 state budget, which is now 53 days past its statutory deadline for completion of June 31.

“Wisconsin Republicans have failed to put people first, punting on issues of funding for education, fixing our roads, and more. The Republican Co-Chairs of Joint Finance continue down this path of misplaced priorities, putting this $3 billion corporate welfare deal with a foreign business ahead of the budget, which is now almost two months past due.

The $3 billion Republicans plan to hand over to Foxconn over the next 15 years are taxpayer funds that could instead be used to fund our neighborhood schools, increase access to higher education, fix our rundown roads and bridges, or provide health care for our most vulnerable neighbors. The rush to approve this bad deal makes it crystal clear that Governor Walker and Republicans are willing to sell out Wisconsin’s future to a foreign corporation.” 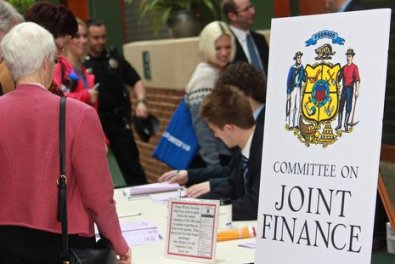