MADISON – Today, Representative Lisa Subeck (D-Madison) and Senator Dave Hansen (D- Green Bay) are introducing a resolution calling for a statewide advisory referendum to give voters the opportunity to voice their support for a constitutional amendment overturning the Supreme Court’s ruling on Citizens United. Since the 2010 ruling which has ushered in a new era of unlimited corporate spending on elections, 144 counties and municipalities in Wisconsin have joined over 780 counties and municipalities nationwide in passing similar referendums or resolutions. About 3 million people (55% of Wisconsinites) live in the jurisdictions where resolutions or referendums opposing Citizens United have passed.

“With each election, it becomes clearer that people are fed up with the corrupting influence of unlimited special interest spending on our elections” said Rep. Subeck. “Through its ruling on Citizens United, the Supreme Court handed a giant megaphone to corporations and billionaires who can afford to drown out the voices of the average citizens.”

During the last two legislative sessions, the Republican majority failed to act on similar resolutions, refusing to even hold a hearing. Since the Supreme Court ruling on Citizens United, outside spending on elections by special interests has reached an all-time high, while rulings by the Wisconsin Supreme Court have allowed the sources of much of this spending to go undisclosed, keeping Wisconsinites in the dark about who is trying to influence their votes.

“Citizens United and the resulting influx of spending by corporations and SuperPACs have eroded the people’s trust in their elected officials,” said Rep. Subeck. “We need urgent action to restore our democracy and get big money out of politics, and the first step is to let the people’s voices be heard on overturning Citizens United.” 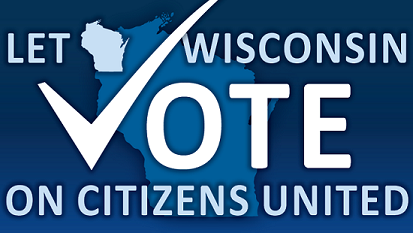