MADISON – Today, the State Assembly passed Assembly Bill 85, authored by Representative Lisa Subeck (D-Madison), Representative Ed Brooks (R- Reedsburg), and Senator Janet Bewley (D-Ashland), to allow municipal officials to serve as election officials. Prior to 2016, it was not unusual for members of City Councils and Village or Town Boards to serve as poll workers on Election Day. The practice was discontinued after an attorney from the League of Wisconsin Municipalities provided a legal opinion that the practice is actually prohibited under state statute.

“The City of Madison alone lost four highly experienced chief polling inspectors due to the new interpretation of current law,” said Representative Lisa Subeck. “The bill passed by the Assembly today provides a common sense fix to state law by once again allowing local elected officials to serve as election officials, as had previously been the widely accepted practice.”

Under current law, a member of a municipality's governing body is prohibited to hold another office or position of employment within the city, village or town with three narrow exceptions. AB 85 would add serving as an election official to the list of exceptions. The bill does not remove the prohibition currently in place that prevents an elected official from serving as an election official where his or her name is on the ballot.

The bill is supported by the League of Wisconsin Municipalities and the Wisconsin Towns Association.

“For years, local elected officials have helped keep our elections running smoothly,” said Rep. Subeck. “Assembly’s passage of AB 85 puts us one step closer to returning municipal elected officials to their posts as some of our most knowledgeable and reliable poll workers.”

The Senate version, SB 66, passed unanimously out of the Senate Committee on Elections and Utilities last year. AB85/SB66 is now available to be scheduled for a vote of the full Senate. 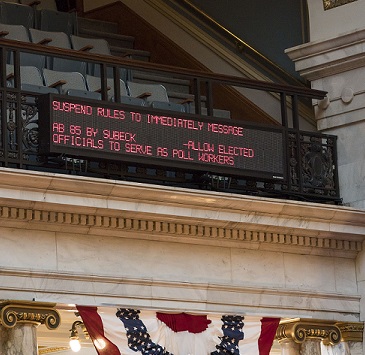