Citizens Hold Hearing on Referendum That Would Give

Voters a Voice on Citizens United

MADISON – Today, citizens from across the state gathered at the Capitol to hold a citizen’s hearing on AJR 8. The bill would place a statewide advisory referendum question  on the ballot asking voters whether they support a constitutional amendment overturning the United States Supreme Court’s decision in Citizens United v. FEC which opened the floodgates to unlimited spending by special interests, corporations, and billionaires to influence the outcome of our elections.

“It is clear from the turnout of today’s citizens’ hearing that Wisconsinites are fed up with the massive amounts of corporate special interest spending Citizens United has ushered into our elections,” said Representative Lisa Subeck (D-Madison). “It is ridiculous that Republicans refuse to even hold a hearing on a bill that would let voters’ voices be heard on the critical issue of Citizens United.”

Today marks the 6th anniversary of the Citizens United ruling, which opened the floodgates to unlimited election spending by corporations and special interest groups. Unfortunately, Republican legislators have failed to act. This week, they refused to take up AJR 8 on the floor of the Assembly and will not even hold a hearing on the resolution.

Six years after the Supreme Court ruling on Citizens United, outside spending on elections by special interests continues to increase, while rulings by the Wisconsin Supreme Court have allowed the sources of much of this spending to go undisclosed, keeping Wisconsinites in the dark about who is trying to influence their votes. Even more recently, Republicans have passed legislation that further deregulates election spending by special interests, corporations, and billionaires.

“Unlimited election spending by corporations, Super PACs, and special interest groups has drowned out the voices of the people and tipped the balance of power in favor of big money special interests in our Capitol. Urgent action is needed to restore our democracy,” said Subeck. “The people of Wisconsin want the opportunity to make their voices heard, as evidenced by the citizens in attendance today and the 61 counties and municipalities that have held referendums and overwhelmingly passed resolutions on this issue, but Republicans have again chosen to let the people’s pleas fall on deaf ears.” 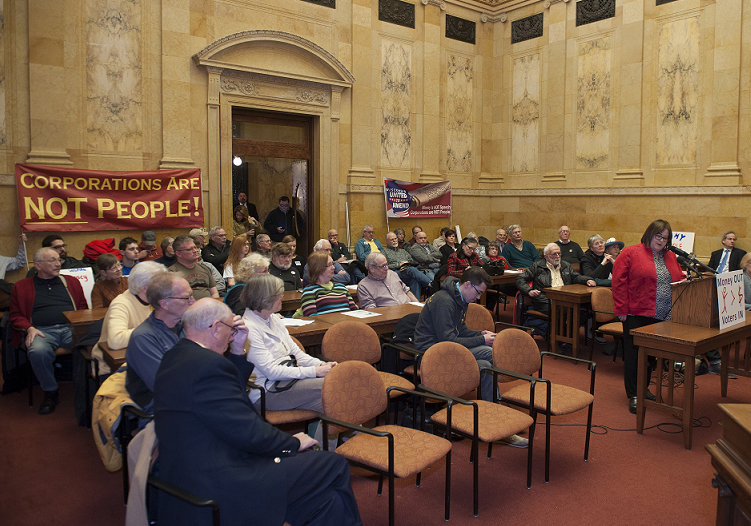