"Gun violence knows no boundaries and impacts our entire state, making it critical that we come together as a broad coalition to address this epidemic,” said Rep. Subeck. “Coalition members share a commitment to advancing common-sense gun safety legislation and putting an end to gun violence, once and for all."

“Sometimes it seems like the only place in Wisconsin that doesn’t exhibit common sense when it comes to gun violence is the State Capitol,” stated Rep. Berceau. “People are ahead of their legislators. Citizens from across the political spectrum are forming groups like WCGS because too many elected officials are turning a blind eye to the problem of gun violence in all of our communities.”

“I’m thrilled to be part of a Coalition that draws from so many different disciplines,” said Rep. Taylor. “Gun violence affects everyone, and gun safety measures make everyone safer. Every Wisconsinite deserves to live in a safe community.”

“Wisconsin’s gun violence epidemic is a public health crisis—we’ve all been affected by gun violence, and it’s time for us to come together to take a holistic approach to this problem facing our state,” said Rep. Sargent.

The Coalition revealed its first legislative priority, Assembly Bill 65, which would institute universal background checks on all firearm sales. 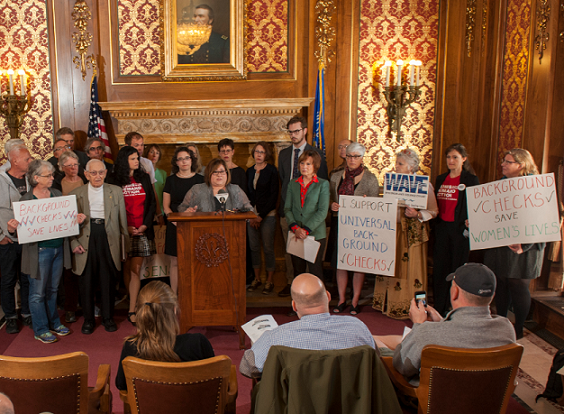