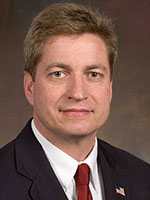 Senator Tim Carpenter has lived in Milwaukee, a city his family has called home for over 63 years, his entire life and is a long-time homeowner in Milwaukee’s 3rd Senate District. His mother was a telephone operator and his father worked at the Falk Corp. Senator Carpenter was born at St. Francis Hospital and baptized and confirmed at St. Alexander's Church. He attended Morgandale Elementary School, Sholes Middle School and Pulaski High School.

Prior to serving in the Legislature, Senator Carpenter worked at Rustlers Steak House, then for Federal Express. In 1984, at 24 years old, he ran for the State Assembly and won a six-way Primary. In the Assembly, he served as the Assembly Speaker Pro Tempore, and as chair of the Assembly Health Committee. In 2002, he was honored to be elected to the State Senate and served as Senate President Pro Tempore for the 2007-2008 Legislative Session. Senator Carpenter was re-elected to his third term in the Senate in 2010 with 61% of the vote.

Senator Carpenter is currently a member of the following Senate Standing Committees: Health and Human Services; State and Federal Regulations; Transportation, Public Safety, and Veterans and Military Affairs. He is also a member of the Joint Committee on Information Policy and Technology as well as the Transportation Projects Commission.

Senator Carpenter’s hard work in the Legislature has been well-recognized by local communities, neighbors and various advocacy groups who have awarded him the following: