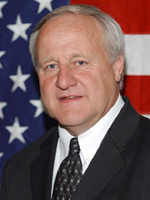 Senator Hansen currently serves as ranking Democratic member of the Senate Committee on Energy, Consumer Protection, and Government Reform. Senator Hansen is on the following Senate Standing Committees: Agriculture, Small Business, and Tourism; Senate Organization; Transportation, Public Safety, and Veterans and Military Affairs. He also serves on the Joint Committee on Legislative Organization, Joint Survey Committee on Retirement Systems, and Special Committee on Review of Emergency Detention and Admission of Minors Under Chapter 51.

Senator Hansen is a third-generation resident of Green Bay, baptized at Annunciation Catholic Church in 1947. In 1971, he married his wife, Jane. The couple has three daughters – Kathleen, Carolyn and Christine – and 11 grandchildren.

Senator Hansen attended the University of Wisconsin–Green Bay and was a member of its 1971 graduating class, the second class to graduate from the university. After his graduation from UW-Green Bay, he taught at Annunciation Grade School for eight years.

Since 1981, Senator Hansen worked for Green Bay’s Department of Public Works as a truck driver, a job he held until shortly after being elected state senator. In addition to representing the 30th District in the State Senate, he also served on the Brown County Board from 1996-2002.