Madison WI. - Wisconsin State Senator Janet Bewley (D-Delta) released the following statement after joining Citizen Action of Wisconsin and legislators at an event in support of recovering $360 million for taxpayers.  Citizen Action collected more than 43,000 signatures in favor of this responsible proposal – the petitions filled a table at today’s event:

“The good news is that Governor Walker’s decision to end his campaign changes the political reality and gives my Republican colleagues the opportunity to undo the damage that was done here at home.

The bad news is that there is plenty of damage to undo.  Job One is to undo the Governor’s decision to leave 360 million Wisconsin dollars in Washington for no reason other than partisan primary politics.

That’s why my Democratic colleagues and I wrote to the Senate Majority Leader last week.   It’s time to bring these dollars home.

Today I am proud to join advocates and people from across the state to drive home the point that it’s time to do the right thing.

Wisconsin taxpayers were left with a deep budget hole, damaging and thoughtless cuts to UW campuses and our beloved Extension and At least 80,000 deserving Wisconsinites were left without BadgerCare.

Three Republican states have brought these dollars home this year alone.  One of the Republican governors still on the campaign trail correctly points out that this is the money of the people of his state.

Governor Walker’s Presidential run was never a good enough reason to leave these dollars, and most importantly these families, behind.  5.8 million Wisconsinites should be able to count on this Governor to put Wisconsin’s needs first. 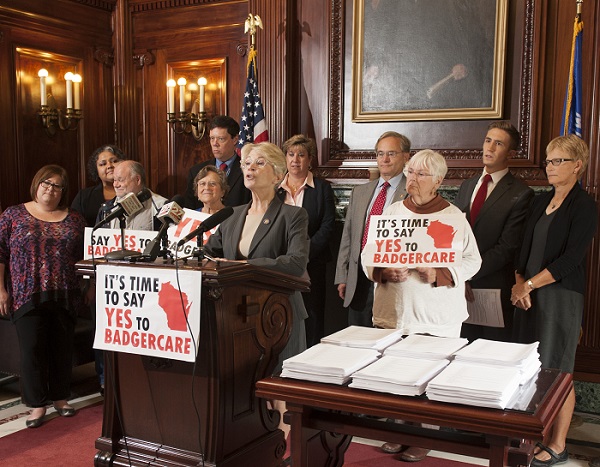