Several years ago, during the 2015-16 State Budget, I led an effort to reform the way revenue is generated for the Wisconsin State Park System using private-sector strategies. My colleagues and I wanted to give the parks the freedom to manage their resources, capitalize on their high-demand properties and find ways to generate income in order to become self-sufficient. With self-sufficiency, the parks are able to make improvements faster, respond to market demands and promote our parks effectively.

I have been consistently monitoring the outcomes of these reforms and I am very pleased to announce that they are continuing to work very well. Revenue system-wide has increased by $1.7 million for the park system overall and future reservations for this summer are up by 21%. Critics of our changes claimed that the small increases for admission and camping would drive people away. This has proven to be completely false.

The reforms we made in 2015-16 changed the pricing for State Park reservations to allow the Department of Natural Resources (DNR) to identify which parks and campsites are the most popular and to adjust daily admission and camping fees according to demand. We gave the DNR the ability to increase rates at popular parks and decrease rates at less popular parks to drive traffic and increase revenue. The changes I authored took affect for reservations for campsites beginning in July 2016.

In the 2017-18 state budget, I authored another motion to provide additional tools and flexibility for the DNR to continue moving toward self-sustainability for the state park system.  These tools included allowing the DNR the option to invest $1 million each year of the biennium from the State Parks Account for maintenance and improvement projects such as repairing facilities, replacing signage, replacing drinking fountains and upgrading non-electric sites to electricity; lifting the state-wide cap for electrical sites from 30% to 35% of campsites statewide; increasing the park sticker fee by $5 for residents and non-residents; creating a $5 surcharge for electrical sites at popular parks; and increasing the range up to $10 for nightly camping fees at the Secretary’s discretion.

In April 2018, the Joint Finance Committee (JFC), of which I am a member, allocated an additional $2.2 million on top of the $2 million allocated in the state budget to the state parks. These funds, which come from the State Parks Fund, will be used for additional improvements and remodeling this summer.  This investment is leveraged with funding from local park Friends groups, stewardship funding and other project-based funding.  According to the DNR, nearly $2.5 million worth of projects will be completed in parks and on trails in or near the 17th Senate District this summer!

Most recently the State Building Commission authorized the renovation and construction of 200 additional electrical campsites system-wide. Park visitors tell us that they want more electric sites and the reforms we have made, as well as the flexibility for investments, are enabling the State Parks to respond quickly to this demand, which will generate additional revenues in turn.

The State Parks Fund has a nearly $10 million surplus in part because of the extra revenue being generated by the parks themselves. Allocating these funds for projects is exactly why we reformed the program. We need to make investments in our parks and the State Parks Fund is healthy because of our reforms. This year, we are investing $4.2 million. I am certain we will continue to reinvest in the next state budget.

As a result of the combined changes during the last two budgets, camping rates moved to a demand-based system that manages different rates for different seasons and days of the week. The DNR is managing camping reservations much like a hotel manages rooms. For example, hotel rooms in Green Bay cost a lot more when the Packers are in town than they do on a non-home-game weekend. While the increases may not be as major in a park environment, they are still being managed to increase revenue when the parks are very busy. 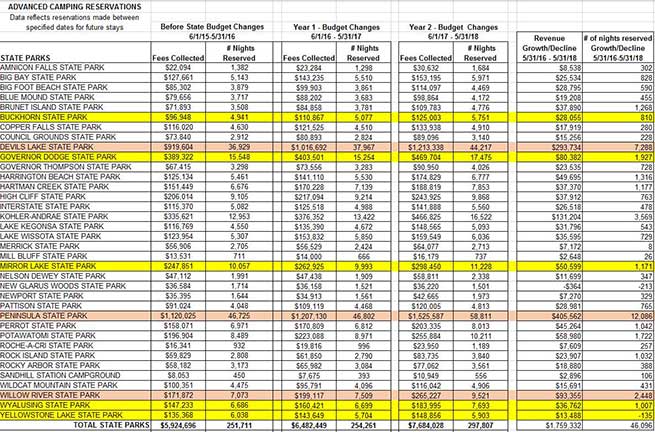 On the flip side, the DNR decreased rates at 36 properties some time during the year.  The greatest decrease was $5.00 to attract campers to less popular state parks.  For example, Lake Kegonsa State Park decreased rates on non-electric sites on weekdays during the summer.  Overall, their revenue increased by $31,796 with 543 more nights reserved!  It works!

It should be noted that under the old pricing structure, the parks were not generating enough revenue to support themselves and taxpayers were subsidizing the State Parks. My family, your family and out-of-state campers, were being subsidized by about 25% for camping at our State Parks. I didn’t think that it was good pricing policy to give campers at our highest demand parks a taxpayer subsidy.

The increase in revenue will make the state park system self-sustaining. Past budgets have required the legislature to allocate funding for maintenance, improvements and staffing at our parks because while some of them are extremely profitable, others are not. By increasing revenue on the popular parks, we are able to make strides toward funding the operations at all of the parks with park revenue. We are also able to reduce prices to attract visitors to less popular parks. This is good business!

I am proud of our hard work and persistence to reform the State Park system toward success. I look forward to observing the improvements we are making this summer and the maintenance work that will ensure a positive guest experience. We must invest in our parks and our reforms are making it possible, reasonable and successful!

To make a reservation at one of our state parks, please visit http://wisconsinstateparks.reserveamerica.com/

For more information and to connect with me, visit my website http://legis.wisconsin.gov/senate/17/marklein and subscribe to my weekly E-Update by sending an email to Sen.Marklein@legis.wisconsin.gov.  Do not hesitate to call 800-978-8008 if you have input, ideas or need assistance with any state-related matters.