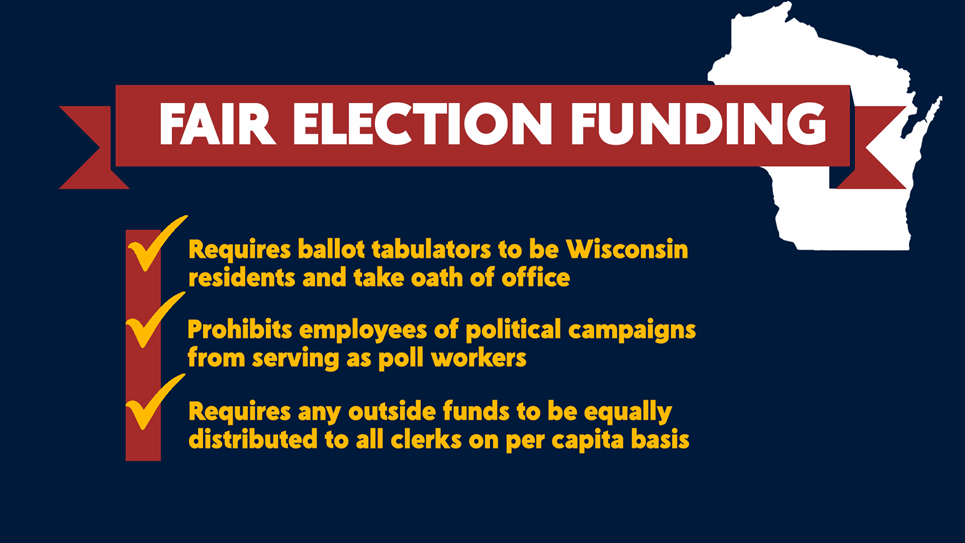 These questions lie at the heart of the debate over a bill I authored that passed the state Assembly. The bill is simple. Local governments cannot accept private money to administer elections. If funds are offered, they must go to the Wisconsin Elections Commission who will distribute the funds across the state on a per-capita basis.

The bill is primarily about fairness. It guarantees rural and suburban areas have access to the same election resources big cities have. But it is also about election integrity. There are some people upset about how money infiltrates campaigns and politics. Do they really now want outside corporate money to influence or control the processes of voter registration, casting of ballots, counting of ballots, and recounts?

In Wisconsin, it’s more than theoretical – it actually happened.

In 2020, Facebook’s Mark Zuckerburg funneled $300 million into a shadowy organization that offered money to five Wisconsin mayors. The cities then had to agree to the rules of Zuckerburg’s group – not the laws of Wisconsin.

If the cities did not do what his group wanted, they would take their ball of cash and go home. Documents were recently unearthed through an open records request that show Zuckerburg’s front group could, “ask for the return of all or part of the grant funds if it determines, in its sole judgement, that any part of the above conditions have not been met.”

There was one small problem: municipal elections are run by the clerks – not by the mayors. This is not a debatable point. Wisconsin statute 7.15(1) clearly states, “Each municipal clerk has charge and supervision of elections and registration in the municipality.”

And that is how this entire scandal came to light. The clerk of the City of Green Bay did not agree to allow this organization to send in “their people.” The mayor responded by taking over the election. The clerk, who resigned in protest, noted, “He (the mayor) allowed staff who were not educated on election law to run the election, along with people who weren’t even City of Green Bay employees.”

The clerk was referring to Zuckerburg’s people. In another recently discovered email, a man from New York named Michael Spitzer-Rubenstein informed the City of Milwaukee he was editing their absentee voter instructions.

Again, how would Democrats react if this was being funded not by Mark Zuckerburg, but by the NRA? What if one of the cities being funded was Waukesha instead of Milwaukee?

Our elections always have been and always should be run by our non-partisan clerks and poll workers should be local citizens who work for the clerk, representing the political parties equally. Our clerks are trained and trusted. Many are elected by the people, others are appointed, but all have one thing in common: the duty and trust to run the election is placed in their hands.

This is Wisconsin. We’re the state that pioneered clean government and is always near the top of voter participation. We do things right and should all agree on this basic premise: the administration of our elections cannot be awarded to the highest bidder.