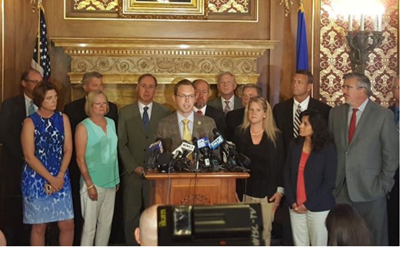 Adam is a Republican elected to represent the 98th District in the Wisconsin State Assembly. His district is located entirely in Waukesha County and includes parts of Pewaukee and Waukesha.

Adam is also the owner and President of The Neylon Group, a commercial facilities maintenance company based in Waukesha, Wisconsin. Adam founded his first business at age 19.

Prior to entering elected office in 2013, Adam worked as a legislative aide in the Wisconsin State Assembly during the passage of Act 10. He previously worked for Congressman Jim Sensenbrenner both in Wisconsin and Washington, D.C., and as a grassroots organizer for the Republican Party of Wisconsin.

Adam was the lead author on several bills that have garnered national attention: the GPS Privacy Act, which criminalizes the act of using a GPS device to track someone without their permission; the Patent Notification Act, which combats predatory "patent trolling" schemes targeting Wisconsin business owners; and the REINS Act, which allows the legislature to oversee the process by which unelected bureaucrats in state agencies issue rules that affect Wisconsin's businesses and families. All three were signed into law by Governor Scott Walker.

Adam was selected to attend the prestigious Bowhay Institute for Legislative Leadership Development (BILLD) fellowship with the Council of State Governments in 2014. He has also served as a member of the Carroll University President's Advisory Council, the 100th Anniversary Capitol Commemorative Commission, and the Assembly Speaker's Task Force on Foster Care.

For the 2023-24 Legislative Session, Adam was reappointed as Co-Chairman of the Joint Committee for Review of Administrative Rules (JCRAR), the committee tasked with ensuring state agencies stay within the bounds of their authority when issuing rules. Prior to this post, he was the Chairman of the Assembly Committee on Jobs and the Economy and the Co-Chairman of the Small Business Regulatory Review Board (SBRRB).

Born and raised in Illinois, Adam likes to say that he moved to Wisconsin as soon as he had a choice. He relocated to attend Carroll University in Waukesha, and has remained a resident since graduation. Adam currently lives in Pewaukee, Wisconsin with his wife and three kids, Elizabeth, Thomas, and Henry.