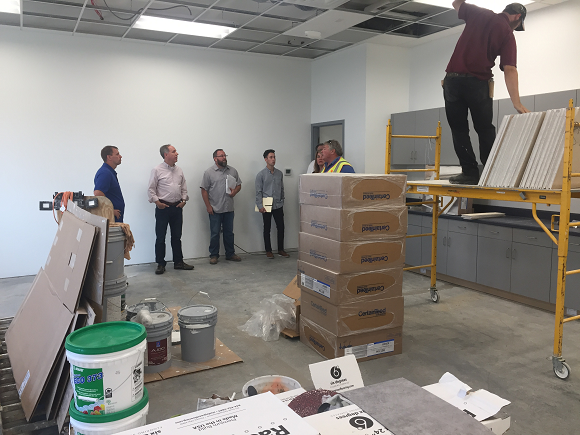 State Representative Robin Vos visited Kansasville Grade School to get an up close look at the new expansion and safety upgrades the building is undergoing. The school was originally built in 1918, with an addition constructed in 1958. The most recent updates are being paid for from the district’s main fund balance and a $20,000 award from the GOP-led school safety grant program that was passed into law during the last legislative session.

“Kansasville Elementary is a frugal school that has met the needs of its students,” Rep. Vos said. “It’s very exciting to see these improvements take shape, particularly how the grant money the legislature set aside for school safety is being used to improve security and keep students safe.”

Three new classrooms are being added to the building and safety upgrades were included based on recommendations from the Racine County Sheriff’s Office. Among those recommendations are a secure front office and front entrance and a security camera system.

“Matt Stratton, the District Administrator, has been an outstanding advocate for the students and the school and has continued to see this project through,” Rep. Vos said. “As students and teachers prepare to return to school in a few weeks, they have a wonderful facility to look forward to coming to each day.”

The improvements and upgrades were built by the PSC construction firm, locally based in the Burlington area.