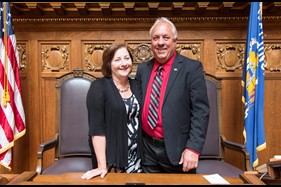 Representative Jon Plumer has been an active member of the community for much of his life. He has previously served as president of the Lodi and Lake Wisconsin Chamber of Commerce. Jon started and continues to operate the Lodi Pride Concerts in the Park series, and he and his wife Chris co-founded the annual Lodi Pride free Thanksgiving dinner. Jon is a member of the Lodi Optimist Club, a member of the Lodi Rotary, and the Columbia County Board of Supervisors.

Jon and his wife Chris have been married for 40 years. They have four grown daughters and eight grandchildren.