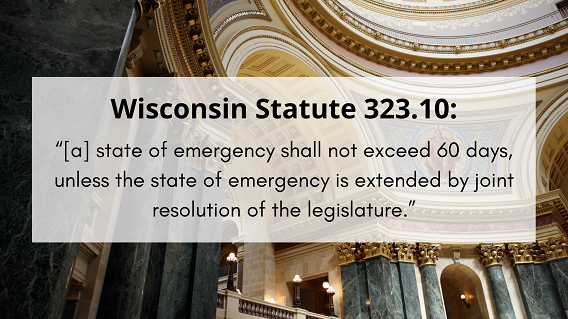 Today the vote I took on the Assembly floor was not about whether to wear or choose not to wear a mask, nor was it about following or not following science.  Rather, my vote reflected following state law and the Wisconsin Constitution.

On March 12, 2020, Governor Evers issued Executive Order #72, declaring his first COVID-19 related public health emergency. The order expired on May 11, 2020. Whether you agreed or disagreed with Governor Evers shutting down the state in March, he had the authority.

Currently, there is a case brought by private citizens pending in the Wisconsin Supreme Court (Fabick v. Evers) challenging the multiple emergency declarations issued by Governor Evers in response to COVID-19. According to The Wisconsin Institute for Law and Liberty (WILL); “Wisconsin law is clear that without express approval from the state legislature, the governor lacks the legal authority to extend an emergency declaration beyond 60 days.”

In order to address COVID-19 precautions, regulations, or mandates; chapter 227 of Wisconsin statutes provides procedures for the governor to implement administrative rules, subject to the approval of the Legislature. As Wisconsin Statute 227.19(1) states, “Article IV of the constitution of this state vests in the legislature the power to make laws, and thereby to establish agencies and to designate agency functions, budgets, and purpose.”

Governor Evers has been extended ample time and opportunity to sit at the table and work with the legislature. But the governor has not done so. Ramifications of Governor Evers’ refusal to follow state law are twofold.

First, his action of a mask mandate has no enforcement. How many times have you read or heard where local law officials have publicly stated they will not enforce his mask mandate?  How many people do you know that have been cited and/or fined for being in violation of these orders?

Lack of enforcement deems the governor’s executive orders to wear masks as not being a mandate but actually an advisory. Effectively, his advisory has shifted power away from local officials who do have the ability to enforce a mask mandate.

According to State Statute 252.03(2): “Local health officers may do what is reasonable and necessary for the prevention and suppression of disease; may forbid public gatherings when deemed necessary to control outbreaks or epidemics and shall advise the department of measures taken.”

Secondly, the governor has been using his executive orders to capture federal Supplemental Nutrition Assistance Program (SNAP) funding via the United States Department of Agriculture (USDA).  The approximately $50 million per month enhanced FoodShare funding, which supports 242,000 individuals and families in response to COVID-19, is based on Wisconsin having an active state of emergency.

If the Wisconsin Supreme Court rules in the Fabick v. Evers case that Governor Evers overstepped his executive authority in issuing multiple emergency orders on the same issue, the enhanced federal funding tied to that illegal emergency order would be suspended.  Additionally, the federal government could claw back the $450 million already distributed to Wisconsinites.

In order to protect the federal assistance program which feeds Wisconsin’s poor as well as the state’s displaced workforce, the legislature amended Assembly Bill 1 (the COVID-19 Relief Bill) allowing the governor to issue an executive order only if the receipt of allotments requires an active state-declared emergency or disaster. As of the writing of this newsletter, the governor has not taken action on Assembly Bill 1.

Wisconsin state law does not allow the legislature to introduce rules for adoption.  Only a governor or their agencies may do that action.  Therefore prior to taking the vote on the repeal of Executive Order 104, I joined 58 of my Republican Assembly colleagues in signing a letter to Governor Evers asking him to change his go-it-alone course and work within the established system to legally enact rules for approval by the legislature that will keep vulnerable Wisconsinites safe.

Legally, an executive order declaring a state of emergency can be revoked through a Legislative Joint Resolution. By instituting Senate Joint Resolution 3, we keep the executive office from overstepping its constitutional power, thus adhering to the Wisconsin Constitution’s provision of checks and balances.

My voting yes does not mean I believe COVID-19 has passed. Nor does it mean that I do not acknowledge COVID-19’s serious impact.  Irrespective of our vote, local governments are legally allowed to impose their own mandates and even without mandates; businesses, schools, or local officials can request their patrons wear masks as they have prior to the mandate ever being issued.