A January 30, 2019 memo released by the non-partisan Wisconsin Legislative Fiscal Bureau estimates tax collections over the next two years will increase by $1.8 billion. The surplus from the 2017-2019 biennium is expected to be almost $600 million, leaving the governor and legislature with nearly $2.4 billion in new revenues with which to develop the 2019-2021 budget.

Bureaucrats in Madison are already announcing new projects and programs for spending the additional revenue.  But first, shouldn’t we realize there is a surplus because the state over collected taxes, or in other words, you the taxpayer overpaid! 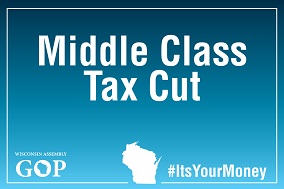 The Middle Class Tax Cut upon becoming law, would increase the standard deduction to $13,360 for single Wisconsin filers and $24,740 for joint filers.  This is approximately a 10.5% decrease in income tax liability making Wisconsin one of the most generous standard deductions in the country.

Wisconsin has a solid surplus and a bright economic future.  The Middle Class Tax Cut will be a great bipartisan start to the new session.