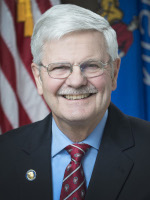 Senator Mark F. Miller is serving his third term in the Wisconsin Senate. He represents the 16th Senate District in Dane County. He was elected in 2004 and re-elected in 2008 and 2012.

Senator Miller served his country as a fighter pilot in the Wisconsin Air National Guard, retiring in 1995 at the rank of Lieutenant Colonel after 30 years in the National Guard.

He is a leading advocate in health care reform and has led the fight to pass a statewide health care plan in Wisconsin. He is committed to making health care both affordable and accessible. Senator Miller is the author of legislation requiring that health care coverage be provided for Wisconsin residents and children. He has continued to work to find effective and reasonably priced solutions to prescription drug costs and assure good quality health care for all Wisconsin citizens.

Senator Miller is committed to sound environmental policy and conservation. He strongly believes it is imperative to make Wisconsin more energy self-sufficient, prevent contaminated drinking water, and reduce run-off pollution into Wisconsin’s lakes, rivers and streams. He is the author of legislation that will reduce our dependence on imported energy, create jobs and encourage a cleaner environment. Senator Miller also authored the Wisconsin Electronics Recycling Law.

He graduated from Middleton High School and received his Bachelor of Science degree from the University of Wisconsin–Madison in 1973. He is also a graduate of the Bowhay Institute for Legislative Leadership Development and the Fleming Fellows Leadership Institute.

Senator Miller and his wife, Jo, have three adult children and three grandchildren.