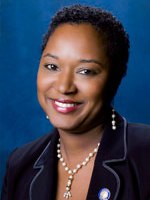 A life-long Milwaukee resident, Senator Lena Taylor is serving her third term in the Wisconsin State Senate, representing the 4th Senate District, including northern portions of the City of Milwaukee, which encompasses the historic Riverwest, Harambee, and Rufus King neighborhoods, as well as the communities of Shorewood, Glendale, and Wauwatosa.

First elected to political office in 2003 in the Wisconsin Assembly, Senator Taylor fights unrelentingly for her constituents’ rights. She won a special election for a seat in the State Assembly and soon after was elected to the State Senate. Senator Taylor is the thousandth senator in the state of Wisconsin, twentieth woman, fifth African American, and only the second African American woman to serve in the State Senate.
Senator Taylor is currently serves as ranking Democratic member on the Senate Committee on Elections and Urban Affairs. She is also a member of the Senate Committee on Agriculture, Small Business, and Tourism; the Senate Committee on Economic Development and Local Government; the Joint Review Committee on Criminal Penalties; and the Special Committee on Symposia Series on State Income Tax Reform Information. In past sessions, Senator served at the Senate ranking member of the powerful and influential Joint Committee on Finance and was the first African-American to chair the Senate Judiciary Committee.
In the community, the Senator serves as a commissioner on the Milwaukee Metropolitan Sewage District and chairs the Personnel, Finance, and Policy Committee of the commission. She also holds seats on the Milwaukee Area Boy Scouts Board of Directors, the Milwaukee Community Justice Council, and the Community Advisory Council of the Blood Center of Wisconsin.
Having graduated from Rufus King High School and the University of Wisconsin-Milwaukee, Senator Taylor was shaped by the city of Milwaukee and has dedicated her life to contributing back to her community in kind. After attaining a law degree from Southern Illinois University at Carbondale, she practiced as a Public Defender for the people of Milwaukee and eventually opened Taylor and Associates Law Office, a general practice firm on the north side. Senator Taylor still holds free legal clinics in conjunction with Greater New Birth Church in Milwaukee for those in need.
Reaching out to children and young adults struggling with the same choices that she herself faced growing up in Milwaukee, Senator Taylor frequently visits schools, youth development programs, and churches, spreading her message of responsible decision making, commitment to education, and ambitious pursuit of dreams.
Senator Taylor’s dedicated efforts to serve her community and state have been recognized by both local and national organizations. In 2010, Senator Taylor was bestowed with the extremely prestigious National Legislator of the Year Award from the National Association of Mutual Insurance Companies. She was the first legislator from Wisconsin, and the first Democrat nationally to be honored with this award in the history of the organization. In addition, Senator Taylor has received accolades for her work including: the Becky Young Community Justice Award in 2009, an award for being committed to fighting for Criminal Justice Reform; the Coalition Against Domestic Violence’s Legislative Advocate Award in 2010; the Wisconsin Builder’s Association’s Friend of Housing Award for 2009, 2010, and 2011; and the Friend of Agriculture Award from the Wisconsin Farm Bureau.
In early 2011, Senator Taylor took a principled and dramatic stand against Governor Scott Walker’s goal of ending collective bargaining as part of the “Wisconsin 14”—the 14 Democratic Senators that left the state in order to prevent the passing of the “Budget Repair Bill” that would strip away the right of workers and end democracy in the public sector work place. Senator Taylor and her colleagues were and are revered by many for their stand in support of worker’s rights in Wisconsin. The National Education Association awarded Senator Taylor and the rest of the Wisconsin 14 their 2011 Friend of Education Award, the first time ever the award was granted to a collective group’s action.
In addition to more than a decade of legal experience, as well as another eight years serving as a political representative for the people of Milwaukee, Senator Taylor is also a devoted mother to her son Isaiah and a mentor to many.