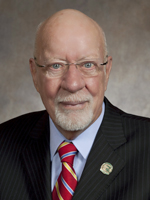 Senator Fred Risser represents the 26th Senate District which includes most of the city of Madison, as well as the village of Shorewood Hills.
A native Madisonian, Senator Risser is the fourth generation of his family to represent this area in the Wisconsin Legislature. He was elected to the Assembly in 1956 and to the Senate in a special election in 1962, and re-elected to the Senate in every election since 1964. Senator Risser’s lifelong dedication to public service gives him the distinct honor of being the longest serving state legislator in the United States.
During his tenure in the Wisconsin Legislature, Senator Risser has left a mark on countless areas of policy. One of his most notable achievements has been enactment of the SmokeFree Wisconsin Act, which has cleared the air in businesses and public spaces throughout the state.
Senator Risser was actively involved in the implementation of collective bargaining for public employees during the 1959 legislative session, which resulted in 50 years of labor peace in our state. He continues to work to overturn 2011 Wisconsin Act 10 and its unprecedented attack on public employees.
Senator Risser is a tireless advocate for maintaining the University of Wisconsin as a world-class teaching and research institution. He is constant in his fight for competitive salaries for UW employees and against excessive tuition increases.
Senator Risser is passionate about preserving Wisconsin’s natural resources through stewardship, the protection of state parks, and expansion of Wisconsin’s vast network of recreational trails. He was instrumental in the creation of Wisconsin's first urban state park–Governor Nelson State Park on the shores of Lake Mendota–as well the development of recreational trails throughout the state. Senator Risser was also the architect of Wisconsin’s recycling program. His environmental advocacy has resulted in being named one of Clean Wisconsin’s “Clean 16” legislators numerous times.
Senator Risser is diligent in his support of Madison and Dane County. He developed the payment for municipal services program, which reimburses the City of Madison with over $6 million annually in lieu of property taxes. Senator Risser has consistently fought for, and won, increased mass transit aids for the Greater Madison Area. As a member of the State of Wisconsin Building Commission, Senator Risser helped develop and implement the state building program and has been a leading force to keep the University of Wisconsin and state government based in Madison.
Senator Risser is currently a member of the following committees: Joint Legislative Council, Building Commission, Senate Committee on Judiciary and Labor, Senate Committee on Education, State and Federal Relations, Senate Committee on Elections and Local Government, and the State Capitol and Executive Residence Board.
In addition to his service in the Legislature, Senator Risser maintains a full-time law practice. He is a member of the State Bar of Wisconsin, the Oregon State Bar and the Dane County Bar Association. Senator Risser holds bachelor’s and law degrees from the University of Oregon.
He is married to Nancy Risser, a retired Spanish teacher. He has three children and four grandchildren. In his spare time, Senator Risser enjoys biking, hiking, gardening and traveling.