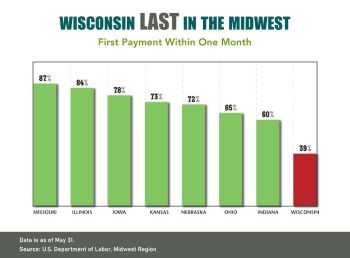 State Representative Robin Vos (R-Rochester) and his Assembly Republican colleagues held press conferences around the state to announce a quick and feasible way to help more than 100-thousand unemployed workers who are waiting for assistance from the state. The Assembly GOP is calling on the governor to use a portion of the federal funds at his disposal from the CARES Act and make direct payments or bridge-loans to individuals whose cases have been stuck in adjudication at the Department of Workforce Development (DWD).

“We need to do more to help people who have been waiting weeks or even months for unemployment benefits after losing their jobs due to the coronavirus pandemic,” said Speaker Vos. “People are tired of waiting for the Evers administration to get its act together and we’re all tired of the administration’s excuses. There are families who are struggling to get by and they need help now.”

According to the nonpartisan Legislative Fiscal Bureau, the Department of Workforce Development is holding approximately 511,500 weeks of claimed Unemployment Insurance (UI) benefits for adjudication. Roughly 140,000 individuals have been waiting for an answer from DWD, some since the beginning of the state health emergency more than three months ago.

“It’s time to have real solutions to help the unemployed and we have the federal resources to do so,” said Speaker Vos. “We’re also calling on DWD to eliminate the backlog of cases and extend call center hours to seven days a week. The delays and mismanagement are unacceptable.”

Wisconsin has proven to be an embarrassment in handling UI cases. Wisconsin is the 3rd worst state in the nation as far as claims paid within 28 days and last in the Midwest. In addition, the Badger State was one of the last states in the country to issue pandemic unemployment assistance to self-employed workers.

“Hundreds of people have called my office, frustrated with the UI process,” said Speaker Vos. “Our plan is a simple and creative way that people could get help to pay their bills and feed their families. They can’t afford to wait any longer.”

The Legislative Fiscal Bureau says there are $280 million in CARES Act funds still available. It’s estimated if $40 million were to be used to help nearly 11,000 individuals, each could receive a loan of $3,708, which would be paid back once the UI claim was fulfilled.