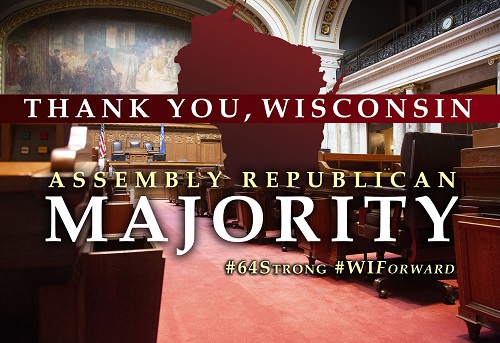 Speaker Robin Vos (R-Rochester) released the following statement in regards to the selection of Tony Evers as governor as well as the return of the historic Assembly Republican majority of 64 members, the largest since 1957.

“I just returned Governor-elect Tony Evers’ phone call to congratulate him on his win.  I would like to assure the citizens of Wisconsin that we will do our best to find common ground when possible.

“The reality is that the voters of Wisconsin have chosen divided government. The state that elected Tony Evers as governor also chose 64 hardworking and passionate Republicans to represent areas throughout our great state. While yesterday was a win for Governor-elect Evers, it cannot be seen as any kind of mandate for change. Assembly Republicans will continue to deliver on our conservative promises to our constituents and won’t allow Wisconsin to slide backward.

“I also would like to thank Governor Scott Walker for his years of service as a legislator and county executive but especially for the last 8 years as our chief executive.  Wisconsin is a better place to start a business, raise a family and achieve the American Dream because of his leadership.”