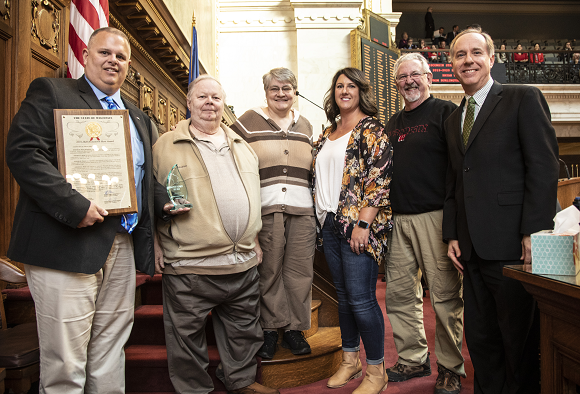 On behalf of the Wisconsin State Assembly, Speaker Robin Vos (R-Rochester) presented the Hometown Hero award to Burlington Police Officer Bryan Wangnoss at the beginning of the Assembly floor session on Thursday. The Assembly’s highest civilian honor was given to the officer for his dedication to his community as a police officer and his contributions to the Special Olympics.

“Officer Wangnoss is a great example that one person can make a big difference in the world,” said Speaker Vos. “Officer Wangnoss should be commended for his work in raising awareness and funds for the Special Olympics.”

Officer Wangnoss has been heavily involved with the Law Enforcement Torch Run. He most recently represented Wisconsin at the 2019 Special Olympic World Games in Abu Dhabi as part of the Final Leg team, which consists of law enforcement officers and Special Olympic athletes from around the world.

The Burlington officer was joined at the Assembly ceremony by his parents David and Alice Wangnoss, sister and Burlington Police Chief Mark Anderson. The award ceremony can be viewed at WisEye.org.