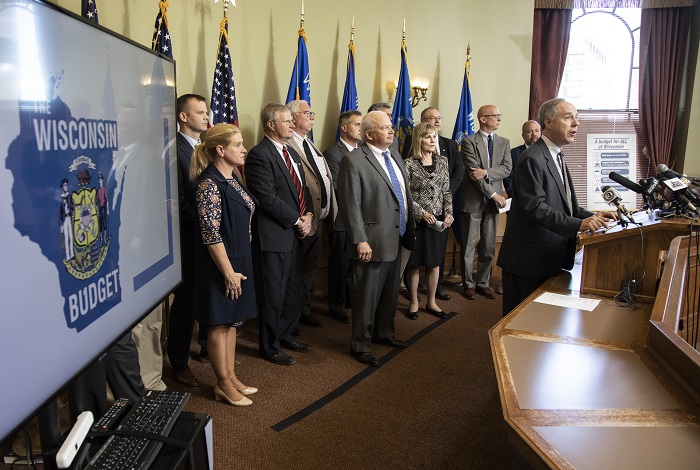 Speaker Robin Vos (R-Rochester) applauds the work of the members of the Joint Committee on Finance after they finalized a budget for all of Wisconsin. The new two-year spending plan invests a record amount in K-12 schools in actual dollars, continues the UW System tuition freeze, cuts taxes, funds health care needs without expanding welfare, and fixes our roads and bridges. The transportation budget includes the largest increase of new transportation revenues in a generation and a significant investment in local roads.

“This budget funds the main priorities of our state without raising taxes on Wisconsin families,” said Speaker Vos. “The governor claims his budget is the people’s budget but he’s ignoring the wishes of many Wisconsinites across the state.”

Governor Tony Evers’ budget would have increased government spending by $6 billion and raised taxes and fees by more than $1 billion making it more of a liberal wish list. His tax-and-spend plan would have expanded welfare programs and reduced accountability in those programs.

Assembly Republicans held more than 200 listening sessions around the state and received more than 40,000 surveys revealing their constituents’ thoughts on state issues and the budget. The top priority for the largest number of respondents was cutting taxes on the middle class followed by increasing state support of K-12 education to two-thirds funding. Eighty-six percent of respondents don’t want to increase taxes by more than $1 billion as the governor proposed and a similar amount would not like government spending to increase to put more people on welfare. Nearly all of the respondents (97%) think able-bodied welfare recipients should work or get a job so they can find a path off welfare.

“It’s clear from our constituents that they don’t want more people dependent on government,” said Speaker Vos. “The Wisconsin budget reflects the views of the people who elected us to office and they don’t want more taxes or runaway government spending. We’re delivering on their priorities; this budget is a good budget for all of Wisconsin."