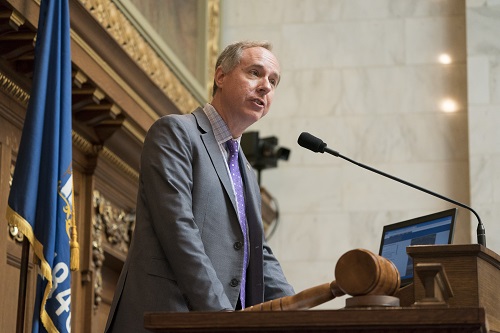 Speaker Robin Vos (R-Rochester) released the following statement after the Assembly Republican majority caucus re-elected him as speaker for the 2019-2020 legislative session.

“It’s my honor to continue serving as Speaker of the Wisconsin State Assembly. I’m humbled to receive this vote of confidence from my Assembly Republican colleagues and look forward to leading this chamber during this time of divided government.

“The voters in each of our Assembly Republican districts told us they want more results. They want a strong economy, more jobs, lower taxes, investments in education and the protection of coverage for pre-existing conditions. It’s now our job to deliver on these promises. While we will work to find common ground with the new governor, we will not surrender our conservative ideals or allow Wisconsin to move backward.”

Speaker Vos is the 75th Assembly speaker in Wisconsin; this will be his fourth term as speaker. The Racine County representative is one of the longest serving speakers in Wisconsin state history.

The following is the 104rd Wisconsin Assembly Majority Leadership Team.