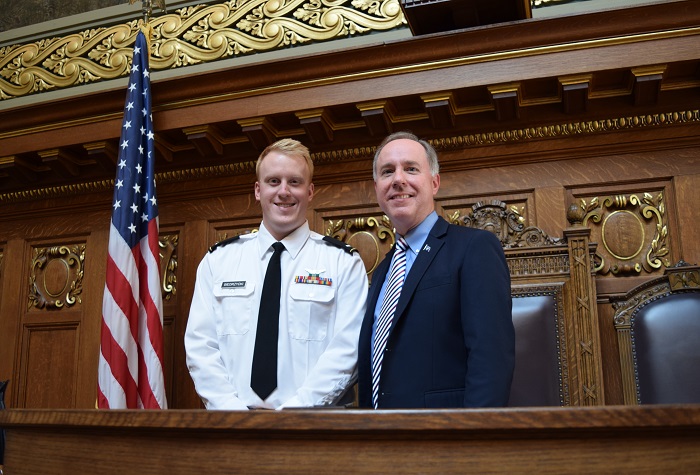 Speaker Robin Vos (R-Rochester) joined his Assembly Republican colleagues in honoring members of the Wisconsin National Guard who participated in the Southwest Border Mission in New Mexico and Arizona. The members received the Assembly’s highest award, the Hometown Hero Award, for their service to their state and nation. Speaker Vos had the opportunity to personally thank Burlington native Cody Biedrzycki, who is a Black Hawk helicopter pilot.

“It was an honor to welcome First Lieutenant Biedrzyki to the Capitol today to recognize him and his fellow guard members for their assistance in securing our border,” Speaker Vos said. “Their mission was an important one: they seized deadly drugs and stopped criminals from entering our country.”

There were 189 soldiers and airman who volunteered for the mission, which included training other guard units from other states. The Wisconsin National Guard contributed to more than 12,516 apprehensions and 1,425 turn backs while seizing thousands of pounds of drugs.

“The Wisconsin State Assembly has a long-standing tradition of recognizing hometown heroes. These are individuals who exemplify the very best traits of Wisconsinites:  service, volunteerism and bravery. I can’t see anyone more deserving of this award than the men and women of the Wisconsin National Guard.”