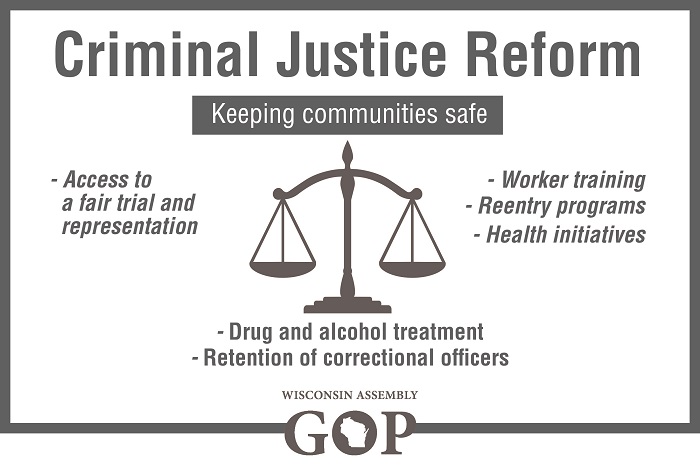 Speaker Robin Vos (R-Rochester) is calling for a comprehensive package of criminal justice reforms to be included in the governor’s budget proposal. Assembly Republicans put forward these proposals at six press conferences held around the state. The reforms make improvements throughout the criminal justice system in order to make our communities safer.

“People who commit a crime must serve their time, but we also want to make sure they don’t re-offend when they get out,” said Speaker Vos. “These reforms show that we can be tough but smart on crime.”

The budget initiatives ensure quicker access to a fair trial and promote a better transition of ex-offenders back into society.

The priorities include the following:

The proposals are already receiving widespread support. Local district attorneys, public defenders, judges and members of the law enforcement joined Assembly Republicans at the six press conferences around Wisconsin to unveil the proposals.

The criminal justice reforms serve as a stark contrast to Governor Evers’ plan to reduce the prison population by half. Assembly Republicans don’t support this idea because two-thirds of those incarcerated are violent offenders.