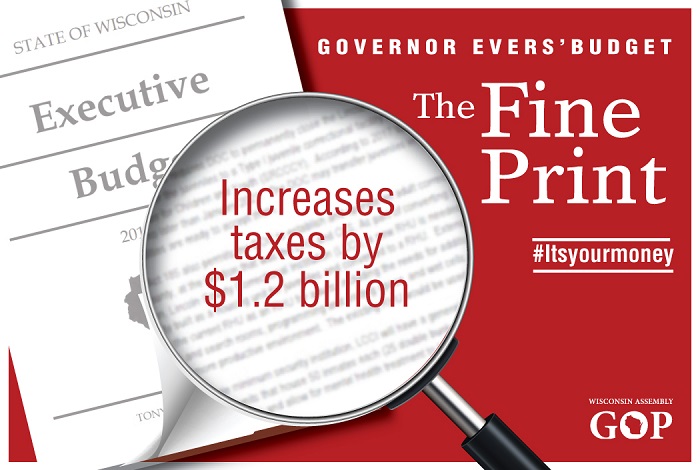 On Tax Day, Speaker Robin Vos (R-Rochester) is pledging to protect taxpayers in the new two-year state budget. Assembly Republicans held four press conferences around the state to reveal the “Tax Day Truths”. The state representatives want to make sure Wisconsinites realize Governor Tony Evers’ proposed budget increases taxes by $1.2 billion. Over the last eight years, Republicans have reduced taxes by more than $8 billion and state revenues went up by roughly 25 percent. A new LFB memo shows the bold Republican reforms will reduce the tax burden by more than $12.6 billion by 2021.

“Wisconsin taxpayers are enjoying the lowest tax burden in nearly 50 years,” said Speaker Vos. “Now is not the time to reverse course on economic progress in this state.”

Governor Evers’ proposed budget increases spending by nearly $6 billion and grows the size of government. In addition, property taxes on a median-valued home would go up by the largest amount in a decade.

Assembly Republicans are proud of what they’ve done to reduce the tax burden on Wisconsin families over the last eight years.  Every state income tax rate has been reduced since 2010, and the number of rates went down from five to four. Republicans eliminated the only state-levied property tax last session.

“We have shown that you can decrease taxes and still invest a record amount in K12 education,” said Speaker Vos. “Republicans have repeatedly taken the budget surplus and returned it to Wisconsin families; the new administration is intent on growing government and raising taxes.”

One of the first bills that Republicans approved this session was a middle class tax cut that funded Governor Evers’ idea with the GOP-generated surplus.  Governor Evers vetoed the measure saying it was unsustainable. Yet, his state budget creates a $2 billion structural deficit (shortfall for the next budget), which is the largest since the Doyle Administration.